Here at Alpha Omega Securities Ltd, we’re passionate about encouraging and sponsoring local events, and at this time of year we start looking forward to one of our favourite annual events…

There’s a chill in the air and the leaves are turning, and that can only mean one thing, The Alpha Omega Halloween Spooktacular is just around the corner!

The Alpha Omega Halloween Spooktacular is the North West’s largest Firework Display, held every year in Nantwich, Cheshire and brought to you by Blitz Fireworks.

This year is the Spooktacular’s 13th anniversary, it’s set to take place on Saturday 30th October at The Nantwich Showground, and we can’t wait!

To help you get into the spirit of the spooky season, we’ve put together our top 5 favourite Halloween facts for you to enjoy…

1. The reason we carve pumpkins at this time of year can be traced back to the Irish legend of Stingy Jack, who fooled the devil, and as punishment was bound to walk the earth with only a burning coal in a hollowed turnip to light his path. Once upon a time turnips were actually carved as Halloween decorations, but this tradition has now evolved into the modern day Jack-o’-lantern!

2. The tradition of trick or treating was once called ‘souling’, where children would knock on their neighbours doors on All Souls Day offering prayers in exchange for food! It’s thought that the additional tradition of saying ‘trick or treat’ originated in the UK, from an activity called mumming, where people would dress up and sing, rhyme or do tricks in exchange for treats!

3. The 31st October was once the eve of the Celtic new year, when it was believed that the dead returned to the earth, so people would light bonfires and wear costumes to scare off evil spirits!

4. Bobbing for apples was once a matchmaking game- young women would mark apples and throw them into the water, then if a young man caught their apple it was believed that this would be their future husband!

We hope you’re as excited for a super spooky Halloween as we are! You can find out more about the Alpha Omega Halloween Spooktacular, and buy tickets, here. We can’t wait to see you all there- keeping those evil spirits at bay with your scariest costumes of course! 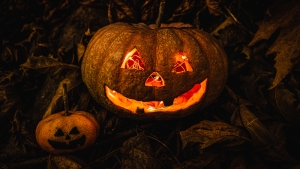