Awarding the Actions of our Security Guard, Godfrey

Here at Alpha Omega Securities Ltd, we love nothing more than celebrating the achievements of our brilliant team members.

This month we were delighted to award one of our Security Guards, Godfrey Ogbeide, with a certificate of achievement for his quick thinking and diligent actions.

On the night of Friday 16th April, Godfrey was on patrol at a site when he noticed some unexpected noises. Godfrey didn’t hesitate to investigate, and when he reached the area that the noises were coming from, he spotted a group of shadowy figures quickly disappearing from the site.

Godfrey proceeded to inspect the car park that the figures had appeared from, and found various drums full of diesel, along with multiple siphon hoses.

Godfrey quickly reported the incident to the police and our control room, and it transpired that Godfrey had disturbed a group of thieves before they could finish stealing the diesel that they were in the process of siphoning.

Well done Godfrey, from all of us here at Alpha Omega! 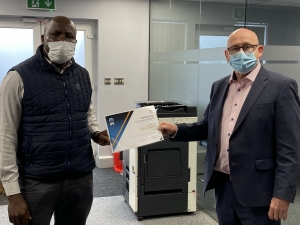