We recently had the honour of hosting our very own Alpha Omega Film night at the Crewe Lyceum!

Here at Alpha Omega we are supporting small, independent films, helping to increase awareness, and getting them onto the big screen.

On the night, we invited a selection of guests, from film buffs, to security guards, and a range of our clients, to come and view the short film Born Fighter, and feature-length film Break, both directed by the talented Michael Elkin.
We started the night with a drinks reception, where people could mingle and make connections ahead of being seated.

Born Fighter was a short 15-minute film, inspired by the life of our very own Ken Lawton.
Ken started his adult life as a professional boxer before a stroke led to him having to change his career path to the Ken we see today. However, this didn’t stop him from stepping in to fight in honour of his friend, whilst still in recovery.
Our audience watched the tale unfold in this spectacular short film.
Independent film director Michael Elkin, with the support of us here at Alpha Omega, hopes to one day turn this into a full feature-length film. The Q&A with the cast after the showing held promise that more people would be ready to see the full film.

Originally due to be released back in 2020, Break was the main event of the evening. This feature-length film follows the light of a bright and talented inner-city kid, who is dragged into a life of crime that slowly sees him in over his head. A chance encounter with a stranger offers the opportunity to get his life back. You’ll have to watch the film to find out what happens!
This independent film has all it needs to make it to the big screen, with excellent actors, a fantastic producer and an incredible director. We cant wait to show more of their films.

Our films were enjoyed by all who attended, not to mention our hot dogs during the break!

We look forward to hosting more of these events in the future and helping these independent films get the recognition they deserve.
For more information on our services or future events, please get in touch with a member of the team who will be happy to answer any questions you may have. 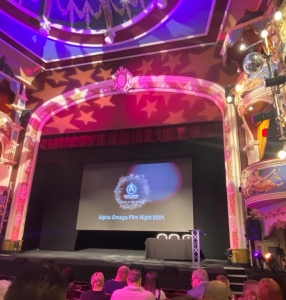